In this chapter you'll learn how Django administers users, groups and permissions. You'll learn how to conditionally display content depending on a user, how to restrict urls and class-based views, as well as how to manage CRUD (Create-Read-Update-Delete) permissions for Django model records based on user permissions.

Introduction to the Django user system

The Django user system is based on the django.contrib.auth package built-in to the Django framework. In this section you'll learn about the core concepts offered by this package, which is the default user system used by a variety of Django apps including the Django admin.

Any User can be further classified into one of various sub-types:

In addition, you can assign Django permissions granularly to a User or Group in order for them to do CRUD(Create-Update-Delete) records on Django models, a process which is done through Permission model records. Or you can also assign coarser grained Django permissions on url/view methods or template content to grant access to a User, Group or even Permission assignee.

The first user you'll want to create is a superuser. If you already set up the Django admin in chapter 1, then you'll already have a project superuser. Either way, I'll recap the process here since you can have any number of superusers. Listing 10-1 illustrates the various ways in which you can create a superuser.

Note A Django username must be unique, pre-existing usernames are rejected

Sometimes you just want to create a regular user, in which case you can use Django's shell utility and create a user directly through the User model. This process is illustrated in listing 10-2.

To confirm the create_user() method generates a regular user, you can see in listing 10-2 a call to the various User model attributes, confirming the user is neither staff or superuser and is just marked as active.

If you wish to change the sub-type (i.e. superuser, staff) of a user created in this manner, you can also do it in the Django admin, a process that's described in the next section. 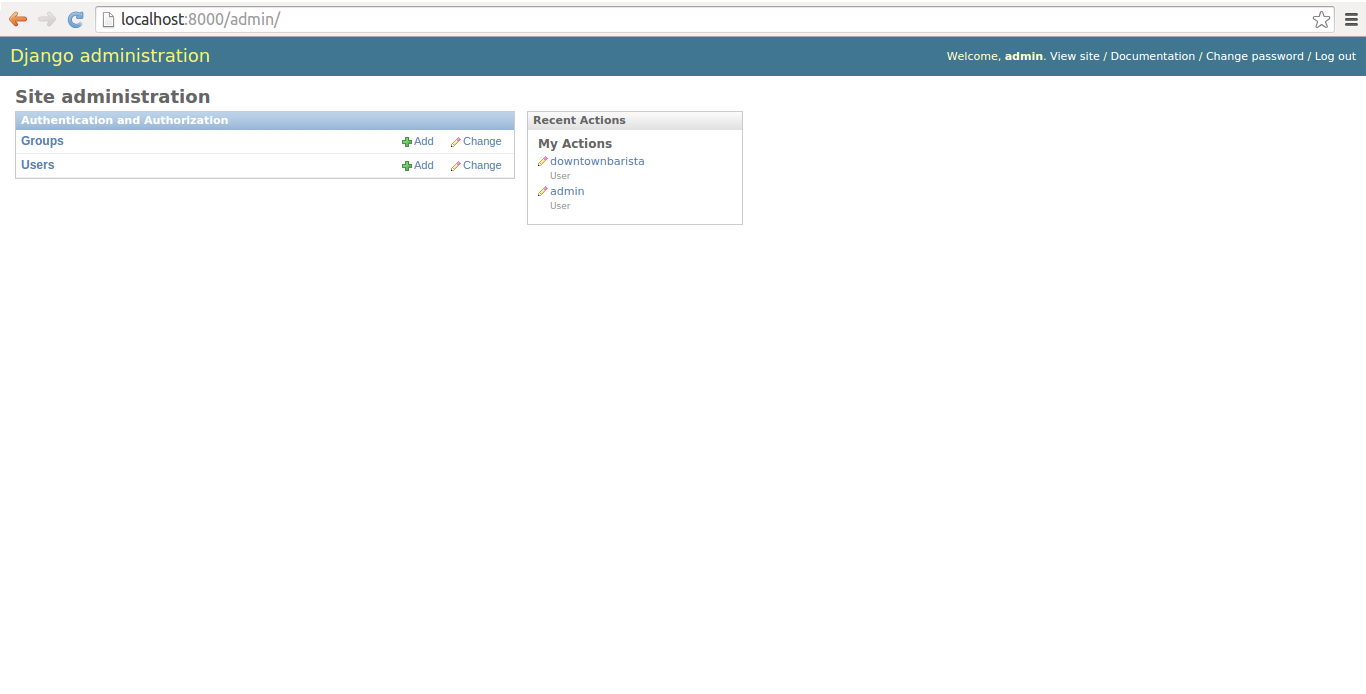 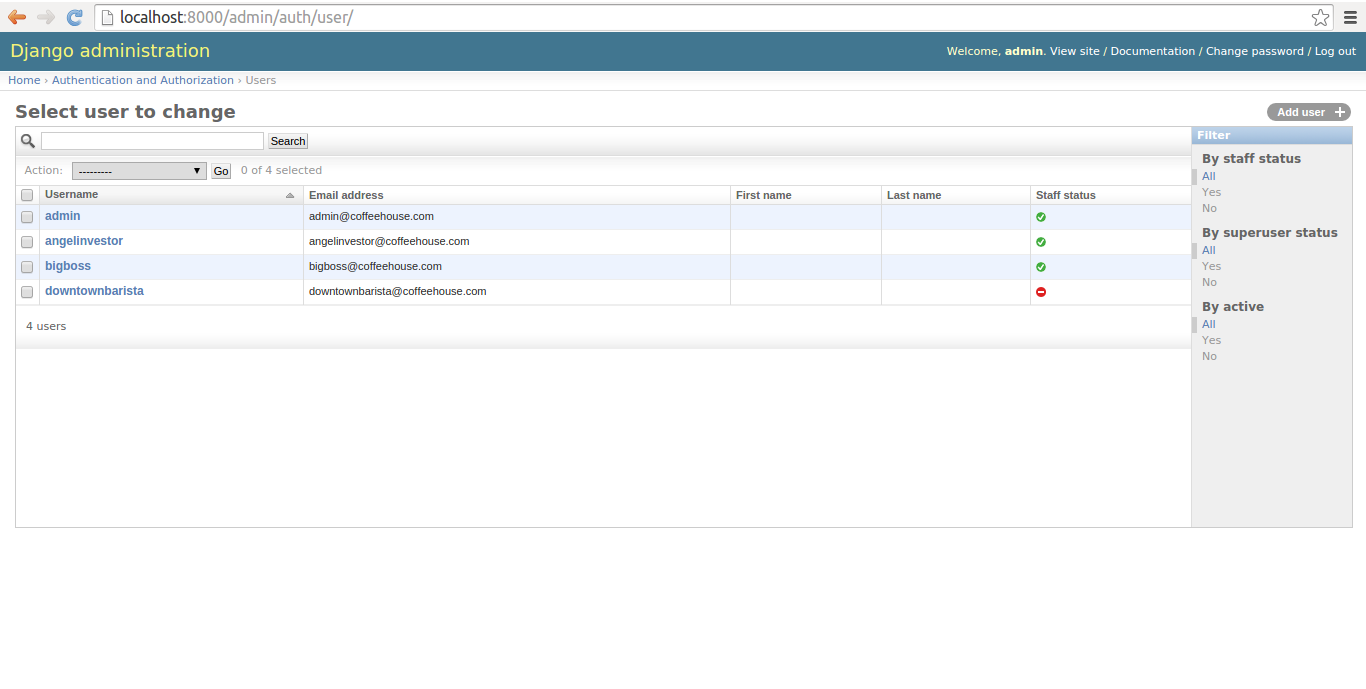 Once a user is in a Django application, you'll end up managing him. This management can be either revoking his privileges, adding to his privileges or even editing his profile information. You can manage Django users in two ways, in the Django admin or by manipulating a User model in the Django shell or directly in your application.

The easiest way to manage users is directly in the Django admin. Once you access the Django admin you'll see a screen like the one in figure 10-1, if you click on the 'Users' link you'll be taken to a screen like the one in figure 10-2 which contains a list of Django users. Each Django user presented in figure 10-2 has his username as a link, if you click on this link you'll be taken to the user's page which is illustrated in figures 10-4, 10-5 & 10-6 where you can edit a user's profile. 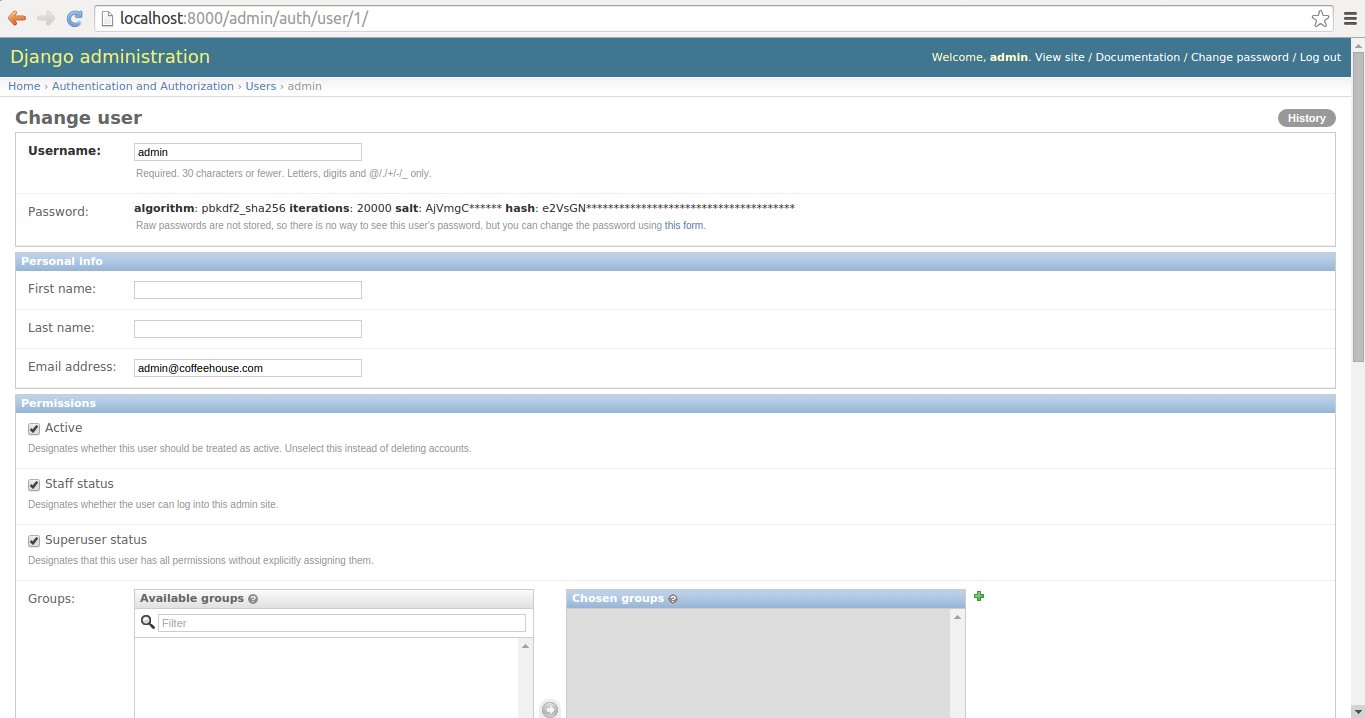 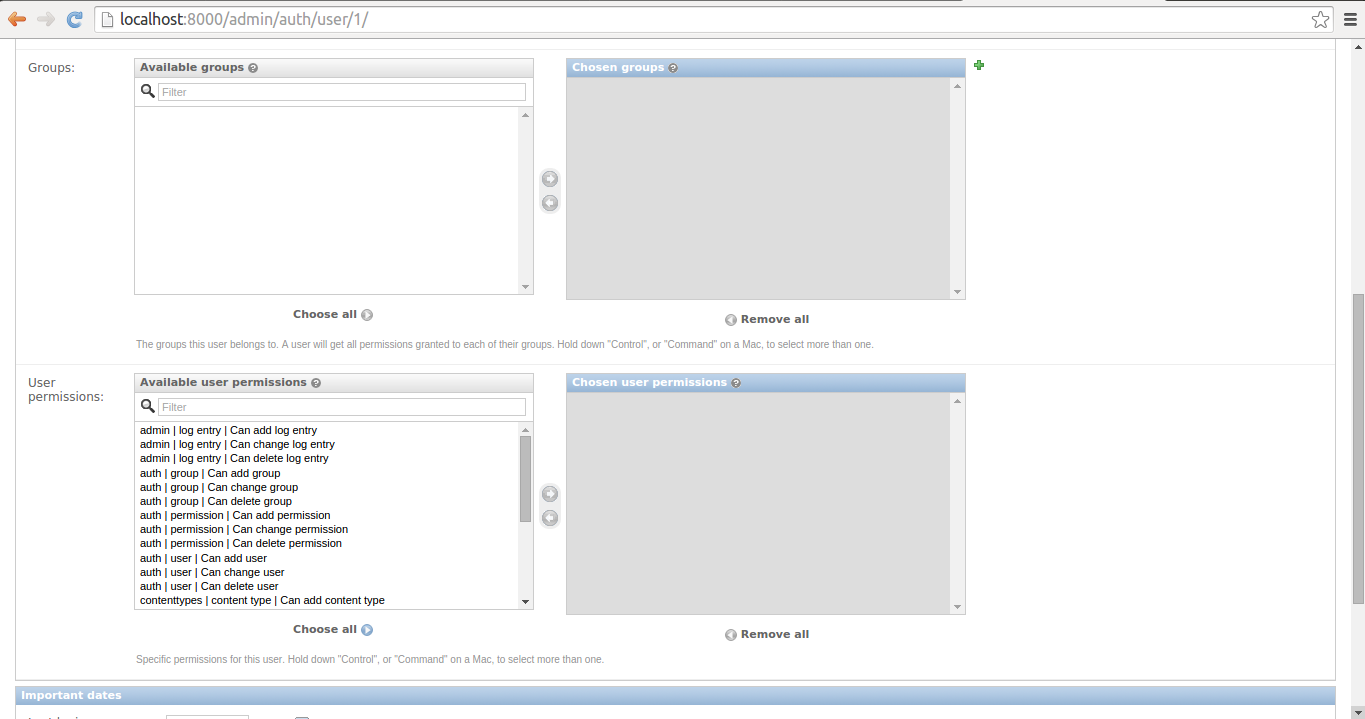 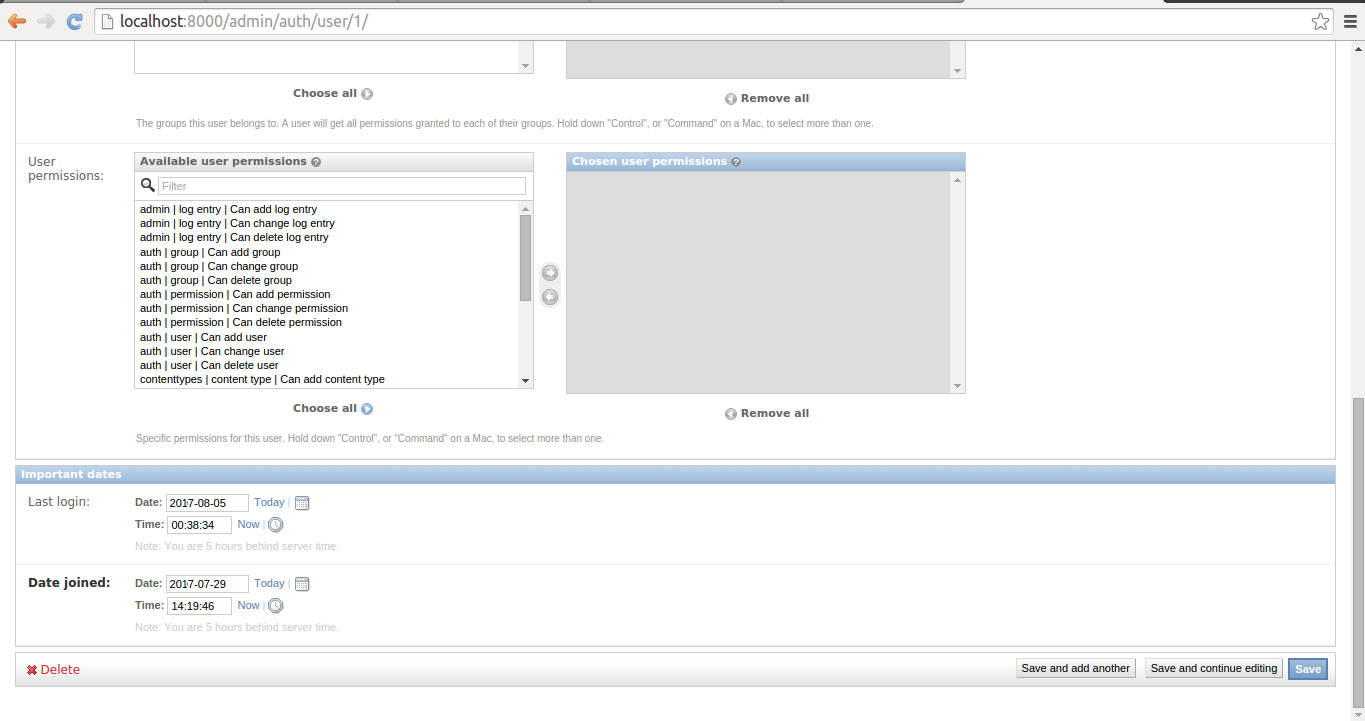 The first part of a user's profile you can edit is illustrated in figure 10-4. Here you can edit his username, his password -- by clicking on the 'small form' link at the end of the small text -- his first name, his last name, as well as his email. In addition, you can see there are three check-boxes where it's possible to change a user's active, staff and superuser status.

If you scroll further down to the end, you'll see the third part of a user's profile you can edit which is illustrated in figure 10-6. Here you can view and update a user's last login, as well as the date a user was created. At the bottom right of the page, you can see the various save buttons to store any changes made to the page. And in addition, at the bottom left there's a 'Delete' button to remove a user completely, however, I would advise you to consider just unchecking a user's active status to restrict access. This last step is sufficient to block a user from accessing an application again and it keeps his other data untouched in case you want to undo the action.

Another option to modify a user's profile is to directly manipulate his User model record. As illustrated in listing 10-3, you first make a query for the desired user and then modify the model attributes or execute one of the User model helper methods.

As you can see in listing 10-3, you can modify the same User profile values as those presented in the Django admin in figure 10-4, figure 10-5 & figure 10-6. Just be aware that because you're making a query, any changes made to model fields must be followed by a call to the save() method on the reference for fields to be persisted. Table 10-1 and table 10-2 contain a full list of fields and methods available on the User model.

By default, Django enforces password follow certain rules, such as: not being similar to a username, containing a minimum amount of characters, avoiding common words and forcing passwords to consist of more than numbers. These password rules are defined in a project's settings.py file in the AUTH_PASSWORD_VALIDATORS variable, as follows:

This list of validators can be edited to suit the needs of a project, by either removing certain rules or inclusively making them more strict with options[1] 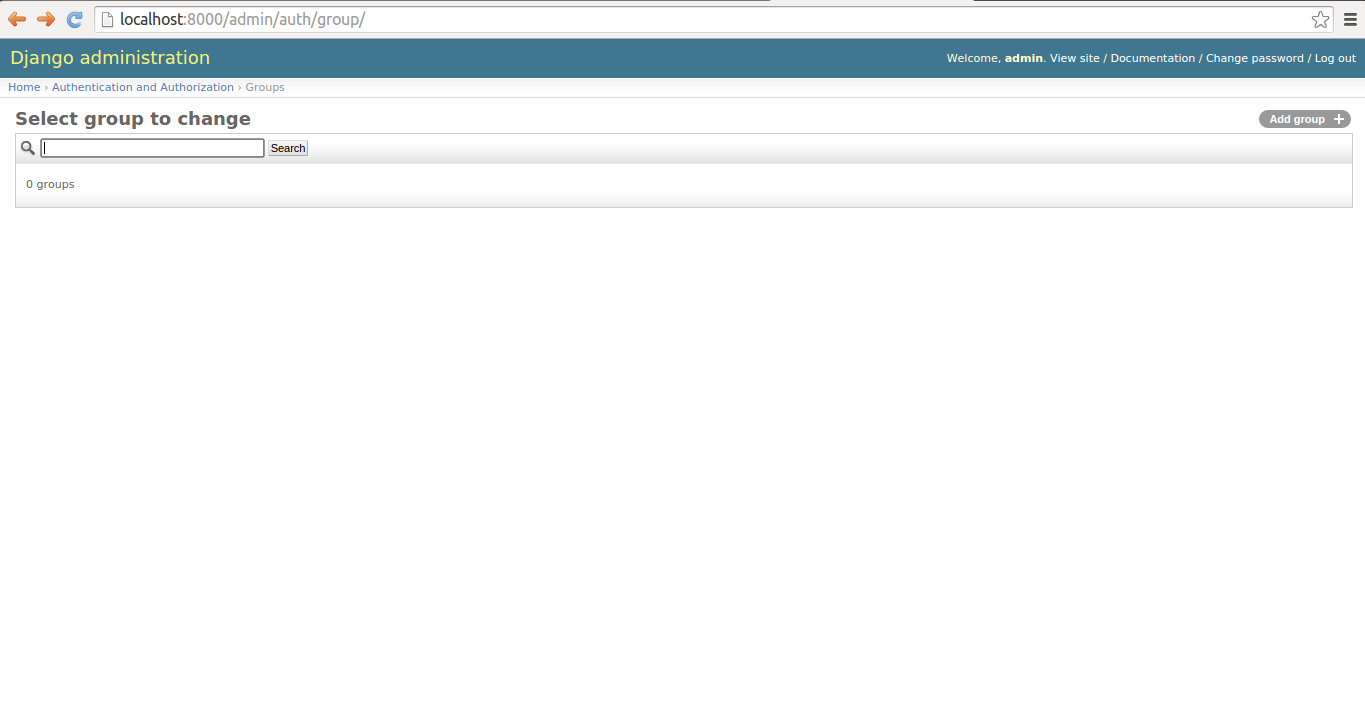 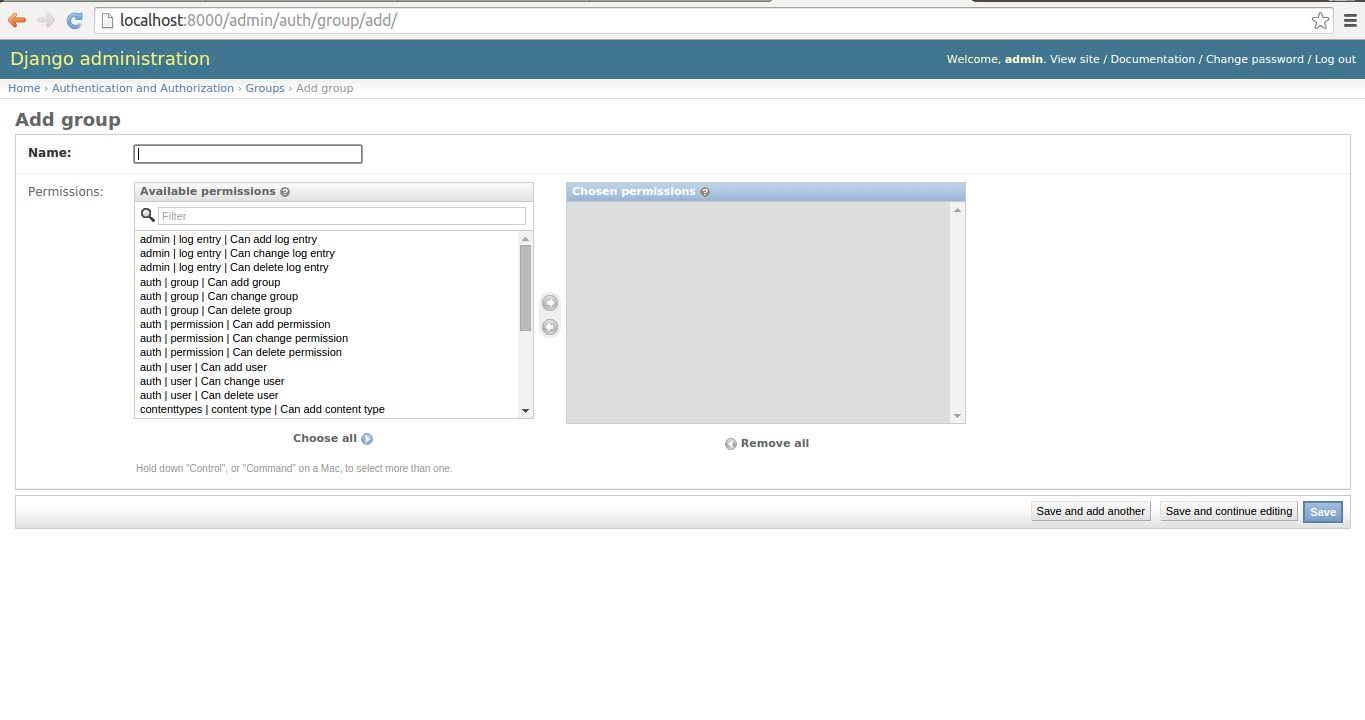 As you can see in figure 10-8, all that's need to create a group is a name and you can optionally specify permissions given to the group to do CRUD operations on Django models in the application.

The management of groups is simpler than users and can also be completely done from the Django admin. What you'll end up doing most of the time is assigning users to groups. 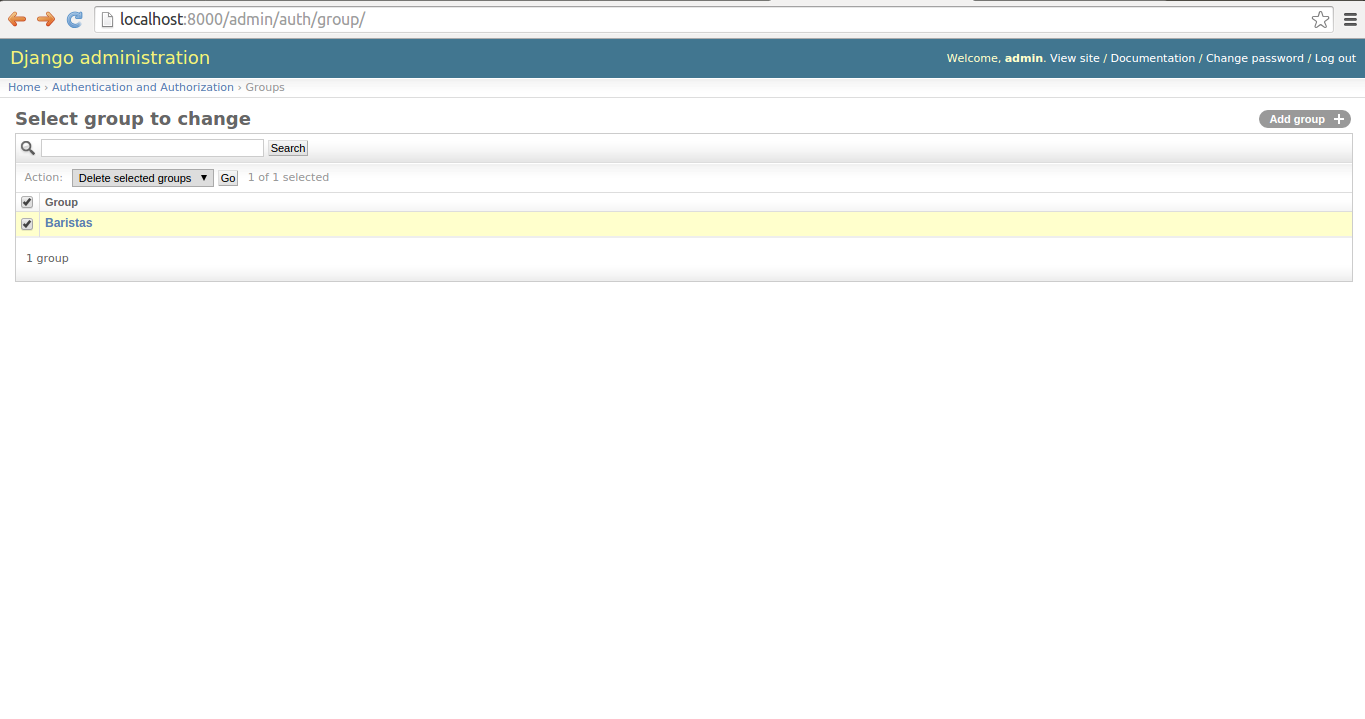