The typical way for Django applications to interact with data is through Django models. A Django model is an object orientated Python class that represents the characteristics of an entity. For example, an entity can be a person, a company, a product or some other concept used by an application.

Django models and the migrations workflow

Django's primary storage technology is relational (i.e. out-of-the-box it can connect to SQLite, Postgres, MySQL or Oracle), so a Django model is designed to map directly to a relational database table. This means instances of a Django model are stored as rows of a relational table named after the model.

Because Django models revolve around data, they are prone to change. For example, a Django model named Store can suddenly require the modification of its original fields due to business requirements (e.g. the addition of a new field like email or the removal of a field that's no longer needed like telephone). Maintaining these Django models changes throughout time is also an important aspect of Django models and is managed through the use of migration files.

Django models are stored in models.py files located inside Django apps. As soon as you create a Django app, an empty models.py file is added to the app for future use. If you're unfamiliar with the term Django app, see the Chapter 1 section on setting up Django content. Listing 7-1 illustrates a sample Django model definition.

Tip Remember the book's code is at https://github.com/drubio/beginningdjango , if you find it easier to follow along with a pre-typed and structured application.

The first two lines in listing 7-1 import the functionality required to run Python classes in Django using both Python 2 and Python 3. If your Django project will just run on Python 3, you can omit these import statements. The third line in listing 7-1 imports the django.db.models package which is necessary to access Django model functionality in the class definition. Next, you can see the class Store(models.Model) statement. The @python_2_unicode_compatible annotation is required to run the class on Python 2, but if you just use Python 3 you can omit this annotation.

After the main class definition in listing 7-1, you can see four fields with the models.CharField data type which qualifies the fields as character strings. Further restricting the acceptable values for each field is the max_length argument for models.CharField (e.g. max_length=30 indicates the maximum length for the character field is 30 characters).

For the moment, don't worry about the models.CharField field definitions. There are many other data types and arguments supported by Django's models package, I'll describe all of these options in the next section on Django model data types.

In addition, notice the Django model in listing 7-1 has the id and objects fields. In this case, I commented them out with # because you don't need to explicitly declare them, both are automatically added to all Django models, but I put them there so you know they exist.

The id field is a Django AutoField data type, that behind the scenes creates an integer table column that increments automatically. For example, when you create the first Store record, the id field is set to 1 by the database, for the second Store record the database sets the id field to 2, and so on. The intent of the id field is to make record searches easier and more efficient. Because the id represents a unique number to identify a record, it's used as a reference, which is also used as a database table's primary key and as an index to speed up record access. While you can override various behaviors of this default id field (e.g. change the field name), I'll leave the details of the id field for a later section and another section on model operations and the importance of the id field.

Finally, in listing 7-1 you can see the class method definition for __str__ which is a standard Python method -- part of what are called 'magic methods' -- that are helpful when attempting to view or print instances of Django models. The __str__ method defines a human readable representation of a class instance (e.g. a Store model instance based on listing 7-1 is output by its name, city and state field values).

Migrations and the Django model workflow 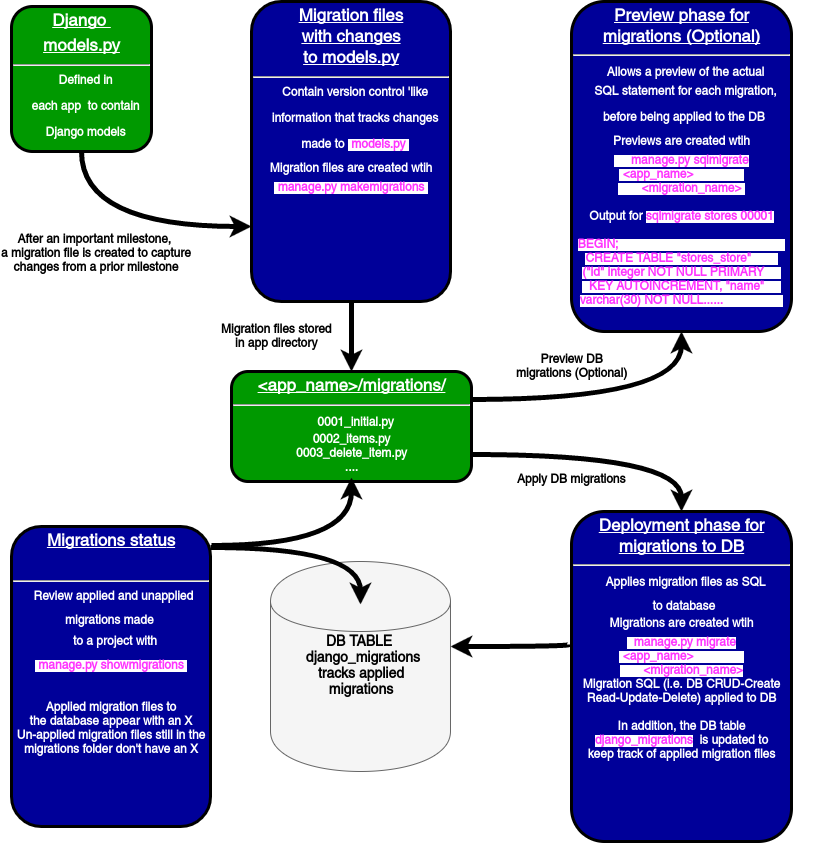 As you can see in figure 7-1, migration files are stored in a /migrations/ sub-directory inside an app, alongside the models.py file they track. And by default, migration files use the naming convention <number_shortdescription> so it's easy to track in what order they were created and what it's they contain.

Next, lets run makemigrations on the Django model you created in the last section. Listing 7-3 illustrates this sequence and adds the stores argument to limit the migration process to the stores app -- if you run makemigrations without any argument, Django inspects the models.py for every app in defined in the INSTALLED_APPS variable in settings.py.

Listing 7-3. Django makemigrations command to create migration file for changes made to models.py

After running makemigrations stores in listing 7-3, you can see the migration file 0001_initial.py. The file is given this name because it's the first migration parting from an empty models.py. Future changes to the models.py generate migration files named 0002.,0003...

Turning our attention back the the workflow in figure 7-1, migration files by themselves are just a first step in the Django models workflow. Next, you can either preview or apply these migration files so the models become part of a database.

To preview the actual SQL statements for a migration before they're applied to a database you run the sqlmigrate <app_name> <migration_name> command. Listing 7-4 illustrates the sqlmigrate sequence for the migration file from the last step.

As you can see in listing 7-4, the migration file 0001_initial.py for the stores app is set to run an SQL statement that creates a database table named stores_store with field names that correspond to the Django model from listing 7-1.

Tip You can change a Django model's default database table name with the db_table Meta class option, the 'Model meta class' section describes this in detail.

Previewing the SQL statements generated by a migration file might not seem too exciting at this stage, but it can be very helpful in other circumstances. For example, if you make complex changes to a Django model or your database is relatively large, it's beneficial to preview the SQL before applying the migration file directly to a database.

Caution Be careful manipulating the database directly without applying the same changes via Django migrations, as this can lead to inconsistencies and errors.

Tip If you don't want a Django model to use migrations, you can use the managed Meta class option, see the 'Model meta class' section for details.