The first steps to correct unexpected behavior in an application are generally to review what you believe are the problematic sections of source code and the corresponding logs. Sometimes though these reviews are fruitless, either because an application has grown in complexity or the unexpected behavior is originating in a not so obvious location.

Under these circumstances, the next step is to start a debugging process with the help of tools to make it easier to detect and fix the problem. In the upcoming sections, I'll describe some of the most popular tools to debug Django applications.

Just like Python's CLI ('Command Line Interface') shell where you can evaluate expressions (e.g. 1+3, mystring = 'django'), Django offers its own shell version through the python manage.py shell command -- where manage.py is the top level file in every Django project.

Django's shell is helpful because it automatically loads a project's dependencies and apps, so you're able to evaluate expressions related to your Django project (e.g. queries, methods) without having to go through a tedious set up process. Listing 5-30 illustrates a series of sample expressions run from Django's shell.

The first snippet in listing 5-30 uses the from import syntax to gain access to a Django project's model classes, after which queries are made on the models to validate results. Note there's no need to import additional libraries or define database connections, all dependencies and configurations are loaded from the Django project itself.

The second snippet in listing 5-30 uses Django's test library to simulate a client/browser request to the /stores/1/ and /stores/5/ urls, after which you can inspect the content response or the HTTP status code (e.g. 404 Not Found). Here again note there's no need to start a web server or open a browser, you can quickly validate a Django project's urls and its responses from the Django shell. 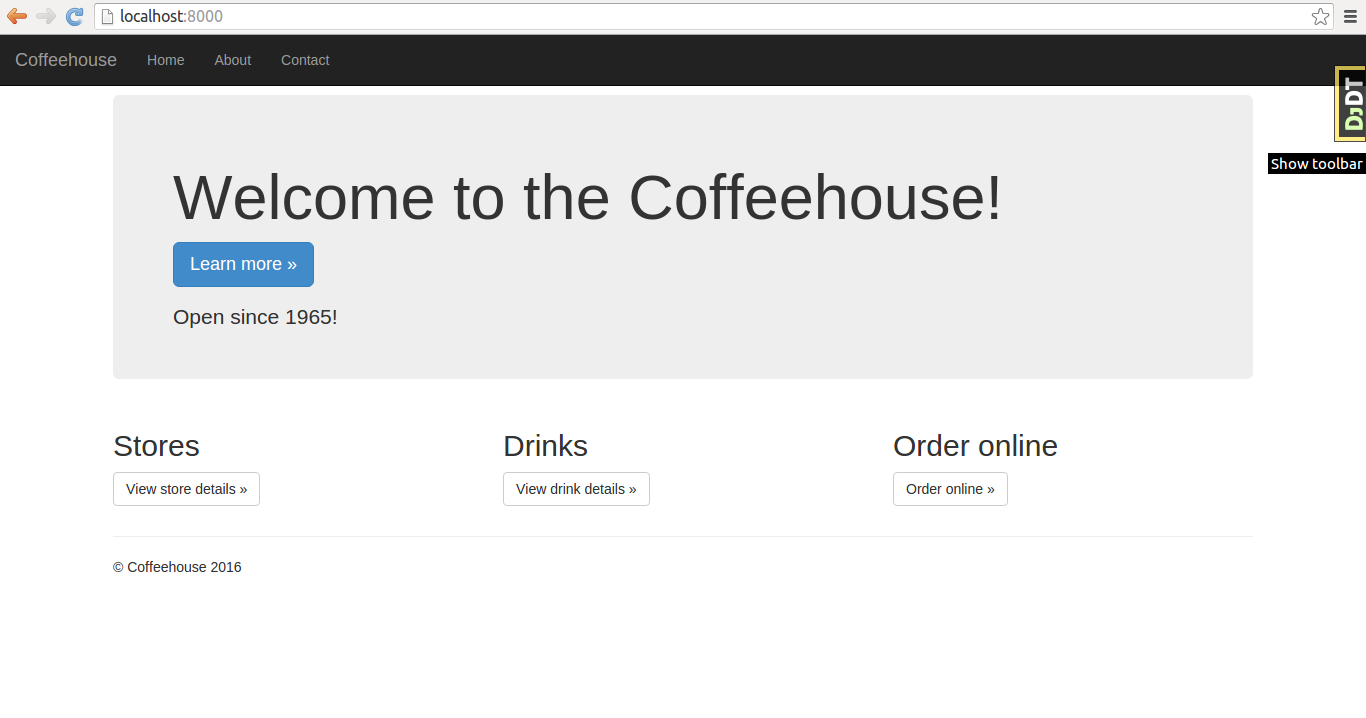 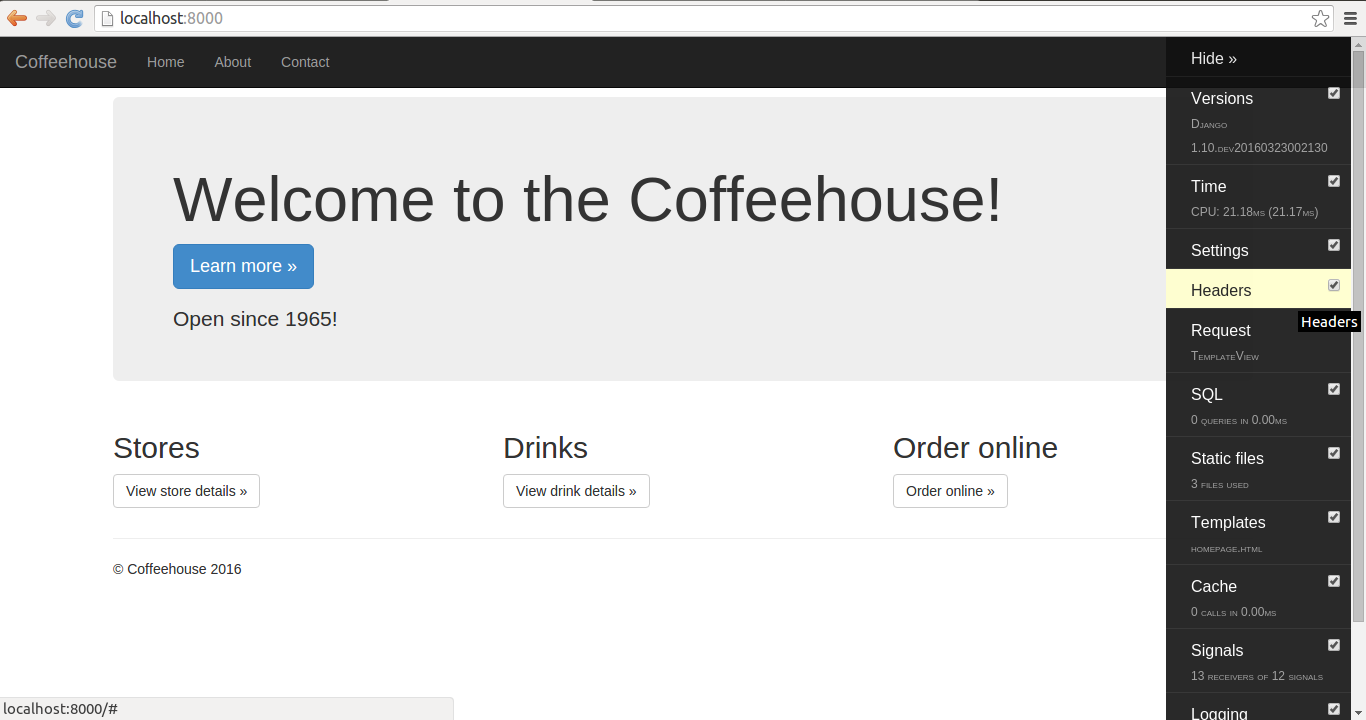 Note The Django debug toolbar only works when a project uses DEBUG=True.

In addition to the UI toolbar, the Django debug toolbar also offers the debugsqlshell utility. This utility works like Django's standard shell, but it outputs the backing SQL associated with any Django model operation, as illustrated in listing 5-31.

Note The debugsqlshell is part of the Django debug toolbar, therefore it must be installed as described in the previous paragraphs (e.g. pip install django-debug-toolbar and added as debug_toolbar to the INSTALLED_APPS variable in settings.py)

As you can see in listing 5-31, the debugsqlshell utility is available through the manage.py command -- just like Django's built-in shell -- and after you run a Django model operation, it also outputs the SQL query for the operation.

For detailed information on customizing the Django debug toolbar see its official documentation[10].

pdb -- short for "Python Debugger" -- is a Python core package designed to interactively debug source code. With Python pdb you can inspect the line by line execution of any Python application. To simplify the process of Python pdb in the context of Django applications (e.g. debug request methods) you can use the Django pdb package.

To install Python pdb run pip install django-pdb and then add django_pdb to the INSTALLED_APPS variable in settings.py in the first position -- the position is important so other Django apps don't override Django pdb's behaviors (e.g. override runserver and test commands). Be aware the Django pdb package only works when DEBUG=True.

There are various way to run pdb with Django, the easiest is to append the ?pdb parameter to any Django url you want to analyze with pdb. For example, listing 5-32 shows a debugging sequence for the http://localhost:8000/drinks/mocha/?pdb url.

You can see listing 5-32 starts with Django's built-in web server and immediately receives and dispatches a response to the regular url /drinks/mocha/. Up to this point everything is standard, however, notice the next request to the url /drinks/mocha/?pdb and the verbose output that follows.

The verbose output tells you where the request enters the application, including arguments, as well as the initial entry point into Django's core framework in the django.core.handlers.base.py package.

After the initial verbose output, the execution stops at the first (Pdb) instance. At this juncture you've hit a breakpoint, so the console running runserver and the requesting client (i.e. browser) freeze until you provide additional input on the console. In listing 5-32 you can see the letter n for next is introduced and the execution moves forward to another line, after which you'll be presented with another (Pdb) prompt or breakpoint. At this point, you can just press the Enter key to re-invoke the previous command (i.e. n) and move forward.

If you want to advance without hitting another breakpoint you can type c for continue so the execution continues normally, without pausing again.

As you can see, the power of pdb with Django lies in the fact that you can walk through the execution cycle of any section in a very granular way, in addition to having the ability to analyze and set variables interactively. Table 5-6 describes the most basic commands related to pdb.

Django extensions is a collection of tools designed for Django projects. As its name implies, it offers extensions for a wide array of areas where Django's standard tools level off in functionality. For debugging purposes, Django extensions offers two tools that I believe are the most important to explore: runserver_plus and runprofileserver.

To use Django extensions you'll first need to install it with pip install django-extensions and then add django_extensions to INSTALLED_APPS in settings.py. Once you setup Django extensions, its various tools become available through the python manage.py command just like Django's standard tools. 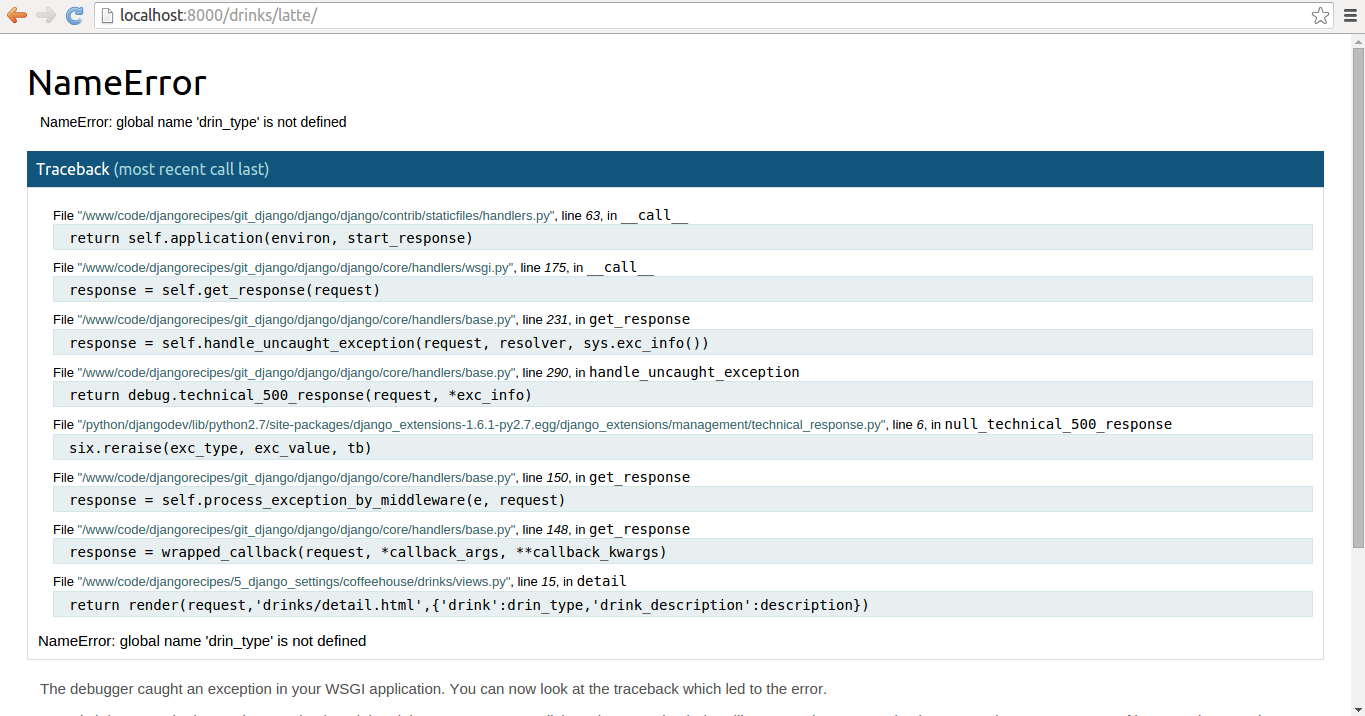 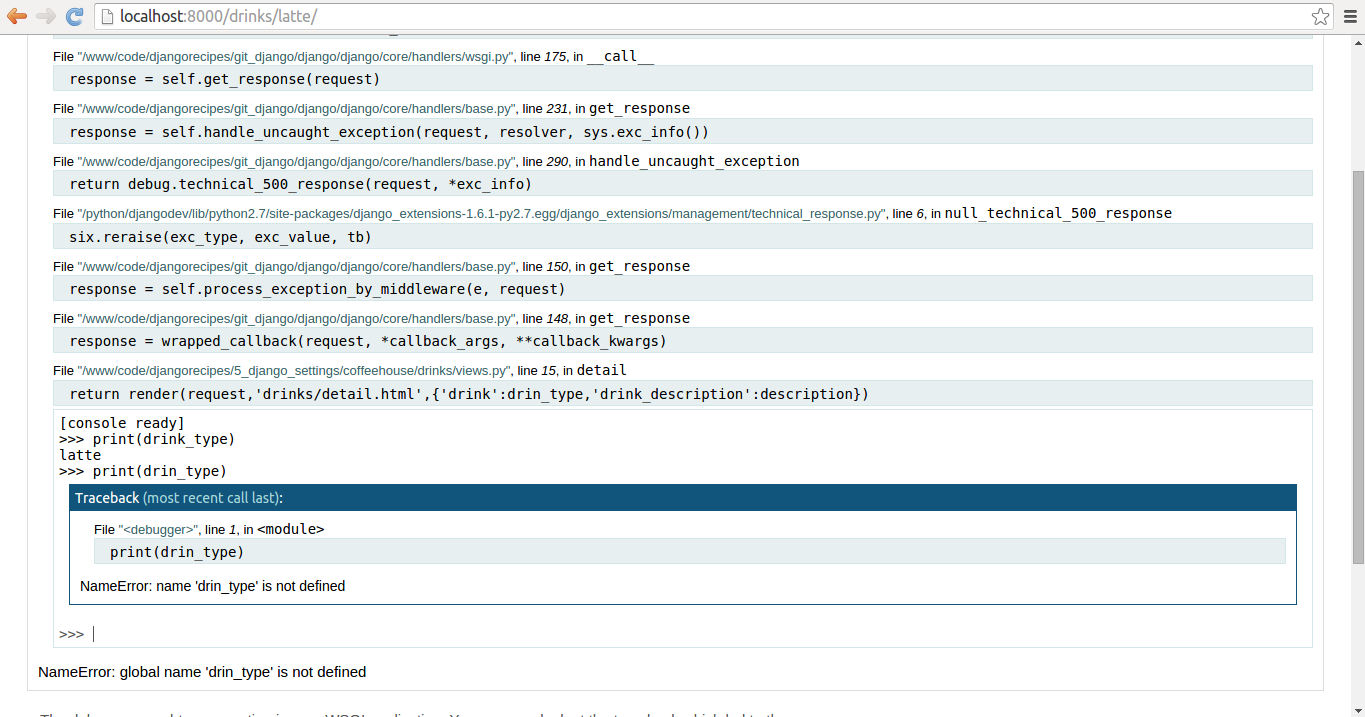 In figure 5-4 you can see a slightly different Django exception page vs. Django's default exception page. This different layout is generated by Werkzeug, but the layout itself isn't what's interesting about this approach, if you hover over any section of the stack trace you can start an interactive debugging session, as illustrated in figure 5-5. This is a much simpler and powerful debugging approach because it's done directly in a browser!

Another powerful Django extensions tool is runprofileserver which can create a Python cProfile for a Django application page. A Python cProfile provides a set of statistics that describes how often and for how long the various parts of a program are executed, which can be helpful to determine solutions for slow loading and resource intensive Django application pages.

The first thing you'll need to do to use runprofileserver is create a folder to hold the profile files (e.g. mkdir /tmp/django-coffeehouse-profiles/). Next, simply start a Django application with python manage.py runprofileserver --use-cprofile --prof-path=/tmp/django-coffeehouse-profiles/ instead of Django's standard python manage.py server -- note the --prof-path flag value points to the directory that will hold the profile files.

Although it would go beyond the scope of the book to dive into cProfile analysis, not to mention there are many tools available for this purpose, if you wan't a quick and easy tool to open Python cProfile files, I would suggest SnakeViz. Just do pip install snakeviz and then run snakeviz <file_name>. Once you run snakeviz on a file, you'll see Python cProfile details like the ones illustrated in figures 5-6 and 5-7. 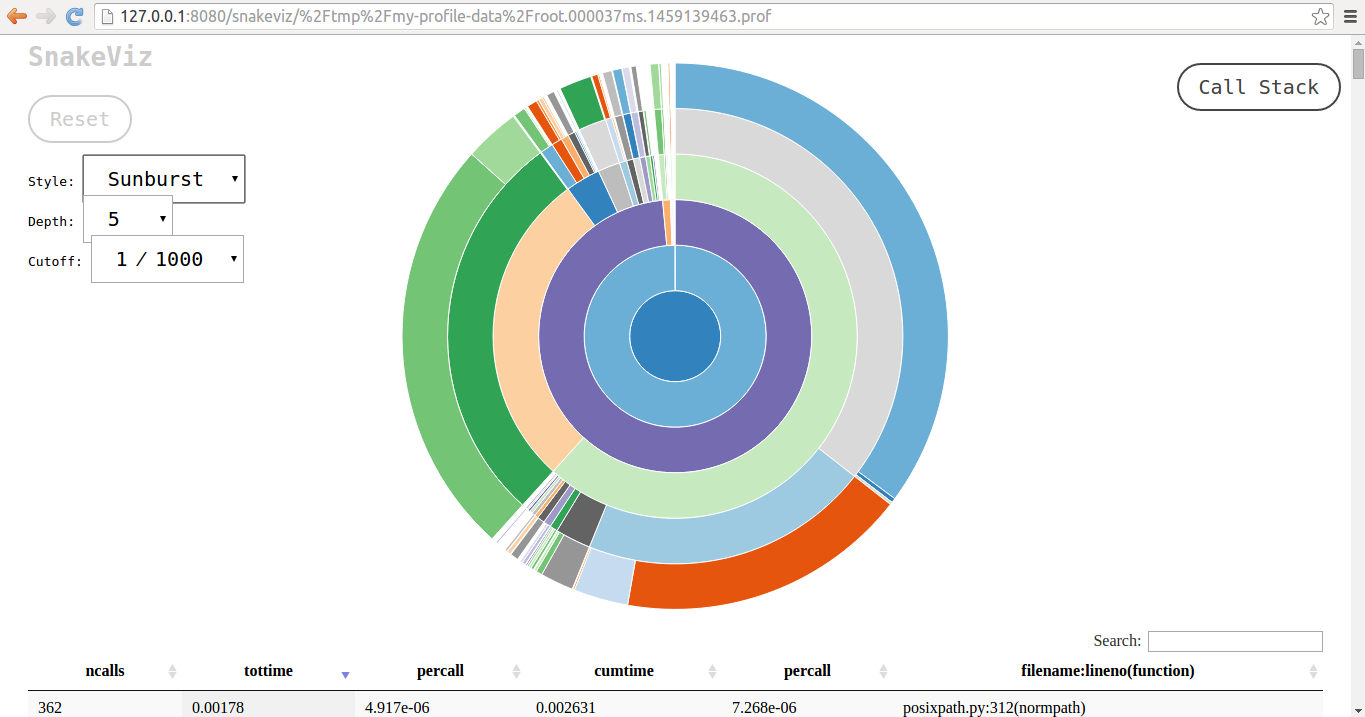 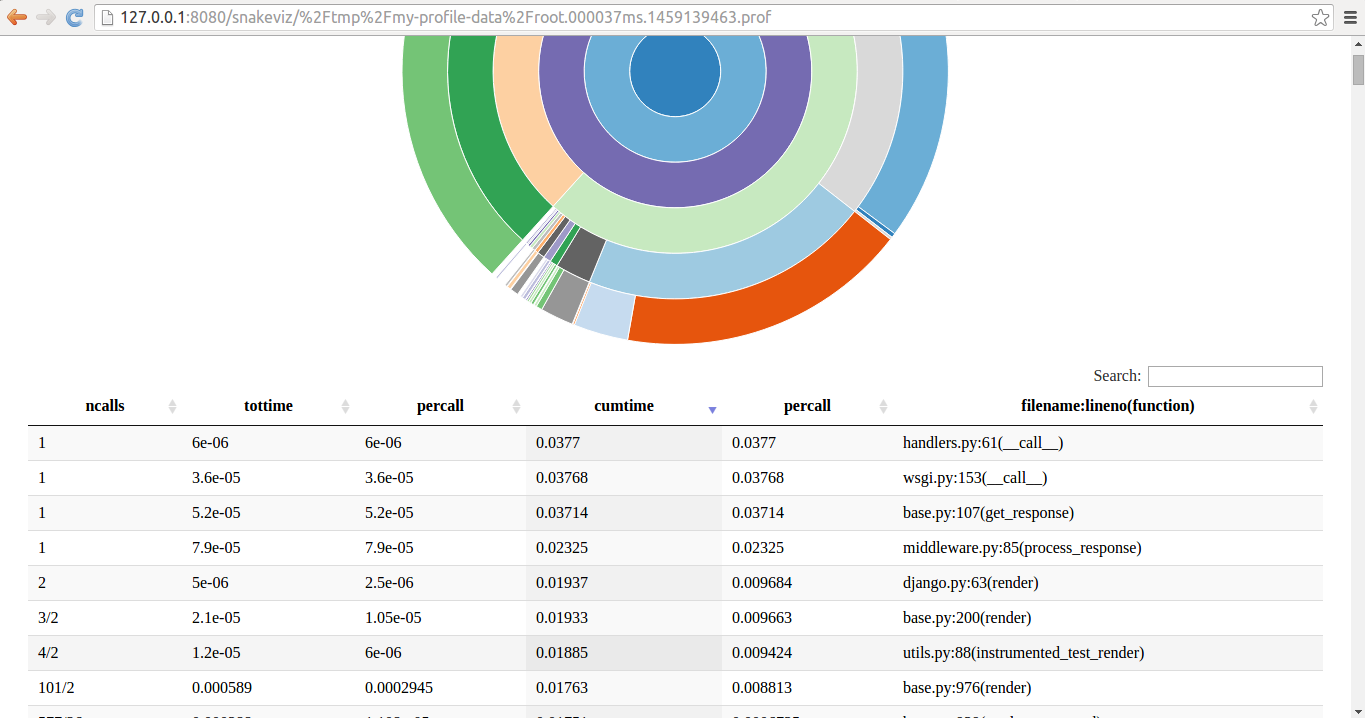 As I mentioned at the start, Django extensions provides many tools in addition to runserver_plus and runprofileserver which I believe are the most appropriate for debugging tasks. Nevertheless, I would recommend you review the Django extensions documentation available at https://django-extensions.readthedocs.org/en/latest/ to explore other tools that might be of use in your own projects (e.g. the show_urls tool displays a Django project's url routes and the graph_models tools generates graphs for a Django project's models).