By default, permissions in a Django project enforce certain actions. In the previous section, you learned how users can be given the status of superuser, staff & active, all of which are permissions designed to work with the Django admin and the overall access worfklow of a Django project. In addition, you also learned how users or groups can be given the ability to create, delete or update Django model records, all of which are permissions assigned to individual Django models.

In the previous section, you learned how to assign Django users different sub-types: superuser, staff and active. The following is a list of permissions associated with each of these user sub-types:

All three user sub-types are stored in the database as part of the User model, sub-types that can be confirmed by using the methods in table 10-2 that belong to the User model. Although User permissions are heavily used in the Django admin, this doesn't mean they're restricted to it. For example, it's possible to rely on a User permissions like superuser, staff or active to allow or deny access to other parts of a Django project (e.g. a link in a template, a url/view method or others actions).

The next section on permission enforcement describes these processes in detail. Next, I'll describe another type of permissions which is associated with Django models.

These add, change and delete permissions are managed at the database level through permission model records, records which are automatically created when you run a Django model's first migration. Managing these type of permissions once they're created is very straightforward, as the assignment is made directly on a user -- illustrated in figure 10-5 -- or group illustrated in figure 10-8.

Similar to the behavior of user permissions, model permissions aren't necessarily restricted to model operations. For example, it's perfectly possible to allow or deny access to a view or a template section if a user or group has a certain model permission (e.g. if a User has the ability to create a Store model or change an Item model, allow access to a page or link).

But again, the next section on permission enforcement describes these processes in detail. Next, I'll describe how to customize model permissions for Django models.

In addition, sometimes it can also be necessary to add custom permissions to a model that doesn't fit the default add, change and delete permissions (e.g. permissions such give_refund or can_hire, to assign users/groups permissions to access certain parts of an application).

Listing 10-4 illustrates a model class that makes use of the model meta permissions and default_permissions fields. 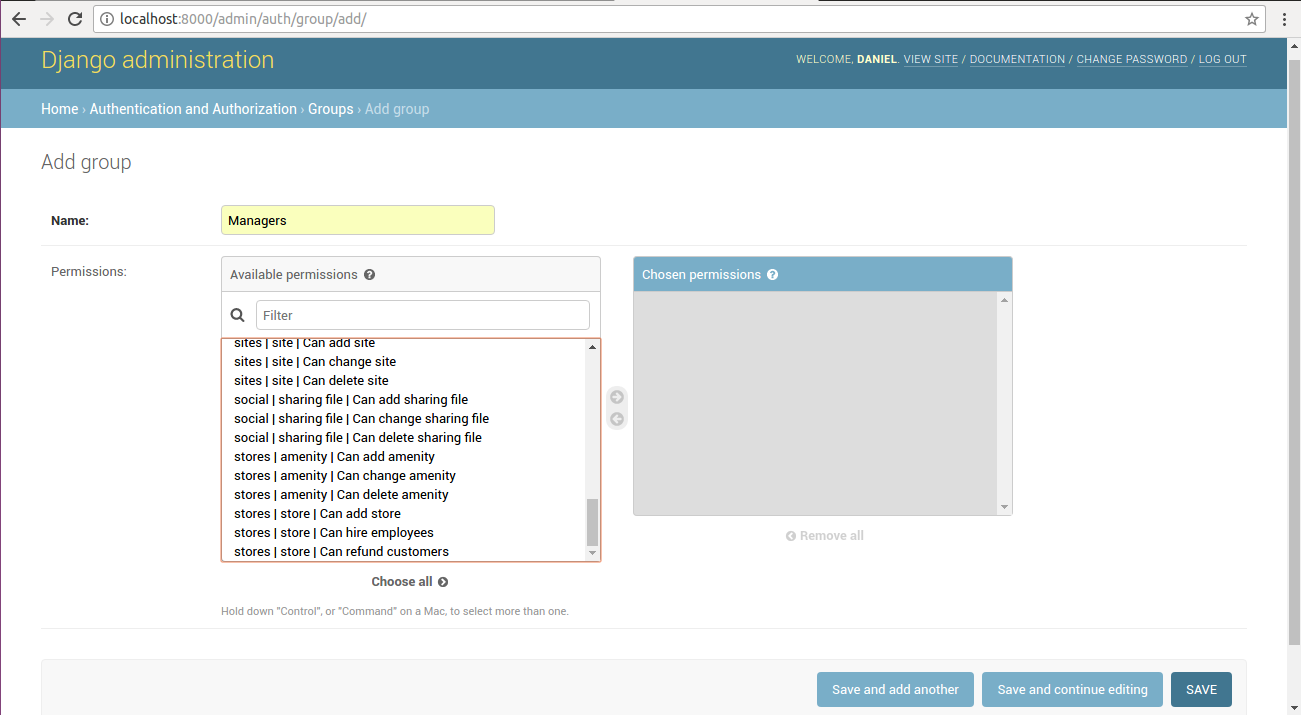 Up next, you'll learn how to change and enforce Django permissions in views, urls, templates, models and class-based views.

Because view methods process incoming requests and dispatch responses to end users, they represent an ideal location to enforce permission checks. For example, you can use a permission check on a view method to return different content, depending if a user is logged-in (i.e. is a User vs. an AnonymousUser) or is a superuser, staff or active sub-type.

Note The User model is available on all view method requests (e.g. request.user) thanks to Django's AuthenticationMiddleware which is enabled by default. See Chapter 2 for additional details on Django middleware.

Tip You can use any User model field or method -- in table 10-1 or table 10-2 -- beside the is_anonymous method to perform a check (e.g.is_staff, is_superuser).

The second example in listing 10-5 uses the @login_required() decorator to restrict to entire view method to logged-in users (i.e. requests that have User and blocks requests with AnonymousUser). This last technique is helpful when know beforehand the view method doesn't require a conditional permission workflow like the first example in listing 10-5.

Listing 10-6. Permission check in view methods with @user_passes_test and @permission_required

The first example in listing 10-6 uses the @user_passes_test decorator and defines an in-line test. The snippet lambda u: Group.objects.get(name='Baristas') in u.groups.all() fetches the Group model record with the name Baristas and checks if the requesting user belongs to this group. If the requesting user does not belong to the Baristas group then the test fails and access is denied, otherwise the user is allowed run through the view method.

The second example also uses the @user_passes_test decorator, but instead of defining an inline test it relies on the user_of_stores() method to perform the test logic. This is particularly helpful if the test is complex, which can make it hard to follow inline logic, compared to having a regular method. As you can also see in listing 10-6, the user_of_stores() verifies if the user is authenticated and also if he has update permissions on the Store model -- note the string stores.change_store is the syntax used by Django's Permission model records.

The last example in listing 10-6 uses the @permission_required decorator which is designed to validate if a user has a given Permission record. In this case, notice the decorator has the input string stores.add_store which indicates that only users that have permission to add a Store model can run through the view method.

What happens when a user fails a permission check ?

For internal validation checks (e.g. those made in the body of a method, such as: if request.user.is_anonymous():) you have absolute control, so you can redirect a user to any page or add flash messages to display on a template. For the decorator validation checks @login_required, @user_passes_test and @permission_required the default failure behavior is to redirect a user to Django's login page. Django's default login page url is /account/login/, a value that can be overridden with the LOGIN_URL variable in settings.py, details of which I'll provide in an upcoming section.

In certain circumstances you can have a Djano workflow that doesn't involve a view method and simply sends control from a url directly to a static template. In such cases, it's also possible to enforce permission checks directly on url definitions. Listing 10-7 illustrates similar validation checks like the ones in listings 10-5 and 10-6 applied to url definitions in urls.py.

Another possibility that can arise for validation checks is to perform them on a group of view methods/urls, so that instead of adding a decorator to each individual view method -- as illustrated in listing 10-6 -- you only do it once for a whole group. This view method/url grouping process is particularly common when defining urls in urls.py through the include() method. Listing 10-8 illustrates how to enforce validation checks on sets of urls that use the include() method.

Listing 10-8. Permission checks in urls.py for include() definitions

Because Django doesn't have built-in support for permissions checks in include() definitions, you can see in listing 10-8 we first define two custom classes followed by the custom method decorated_includes. If you follow the sequence in listing 10-8, you can see the decorated_includes() method accepts two input arguments, first the permission test (e.g.login_required, permission_required) and then the standard include() method with the url definitions. It should also be pointed out the behavior for failed tests in listing 10-8 is the same as those in previous listings, described in the sidebar 'What happens when a user fails a permission check ?'

Another permission check available in Django projects is in templates, a process that's helpful if you want to show/hide content (e.g. links) based on a user's permissions. Listing 10-9 illustrates a series of Django template syntax examples.

Note The user and perms variables used to perform permissions checks in templates are available thanks to Django's auth context processor which is enabled by default -- see the Chapter 3 details on the use Django context processors.

You can see in listing 10-9 all of the template syntax examples use the user and perms variables to perform a conditional permission check. The first example checks to see if the user is authenticated through is_authenticated. The second example verifies if perms -- which holds a user's permissions -- has access to create Store model records, using Django's Permission syntax stores.add_store. And the third example in listing 10-9 loops over a user's groups, to check if the user is in the Baristas group, if it's, it outputs content for this type of user.

Tip Loops in Django templates to check a property are very inefficient. Although the last example in listing 10-9 works, it's a very inefficient mechanism. A better solution is to create a custom filter and perform a direct query in the filter (e.g. {% if user|has_group:"Baristas" %}, with the has_group filter containing the bulk of the logic check). In this case I opted for the syntax in listing 10-9 to keep everything in one place, but be aware the more efficient solution for this type of logic is to use a custom filter described in Chapter 3.

Although you can technically check permissions in class-based views -- just like it's done in standard view methods -- by defining a class-based view's get() and/or post() methods, this technique also forces you to declare the bulk of a view's logic, which is inefficient in a class-based view if all you're trying to do in incorporate permission checks.

Listing 10-10 illustrates as series of option to perform permission checks in class-based views.