If you have prior experience in a classical server-side web programming language -- like Java or PHP -- async web applications require you adopt an entirely different focus. If your technical background is in a server-side web programming language that operates with events and an event loop -- like JavaScript or Go -- then async web applications should be a more natural fit.

Here it's important to notice the emphasis on natively, which means that prior to such years, async Python & Django applications existed, however, they required third party libraries and special integrations to support such async functionalities, some of which -- the still relevant ones -- will also be explored in this chapter. 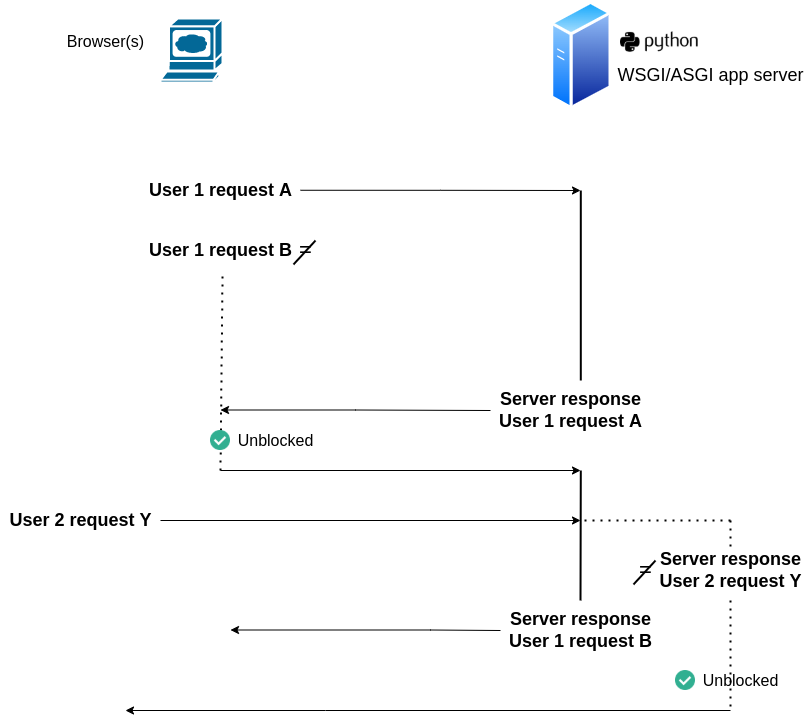 The scenario in Figure 15-1 is an idealized snapshot of what happens by default in most web application. In reality, this blocking behavior at both ends of the workflow in figure 15-1 can be so fast, that it's often not even perceived, however, given certain demands it can quickly deteriorate into a terrible user experience. To alleviate and solve this blocking behavior on both sides of the workflow in figure 15-1, various techniques are available. On the browser side of the workflow, since it operates with JavaScript, you can read a primer on JavaScript asynchronous and parallel execution. On the host server, because it operates with Python/Django, let's take a closer look at how to address this problem.

The typical -- albeit still synchronous way -- to deal with the scenario in figure 15-1 on the Python/Django side is to assign more resources to the host server, so there are more processes & threads available to handle responses. This was already addressed in the set up Django on a WSGI/ASGI server section of the Django application management chapter, where you learned how Django's built-in server is limited to a single process -- like figure 15-1 -- making it of limited use for real-world scenarios and where a WSGI app server is better suited to attend dozens or hundreds of requests a second by leveraging multiple processes & threads.

However, there are scenarios where it won't matter how many resources -- in the form of processes & threads -- you add to an application, you'll still be left with subpar behaviors, until you bite the bullet and adopt async web design. Let's take a closer look at these scenarios that warrant async web design.